Gaming giant Net Entertainment (NetEnt) has used the legendary explorations of Gonzalo Pizarro in the Peruvian rain forest as the basis for their online and mobile slots game, Gonzo’s Quest. Gonzalo was the much less famous younger brother of Francisco Pizarro, who conquered the Inca Empire of Peru in the 16th Century.

Gonzalo spent much of his time in South America searching for the city of gold, El Dorado, and Gonzo’s Quest promises players similar golden rewards against a backdrop of a lost jungle city. Gonzo’s Quest plays on five reels, each displaying three lines, but instead of spinning like normal slots reels, the symbols drop into place in stacks, Tetris-style. The game features 20 bet lines, but the Avalanche feature explained below also helps increase the possible winning bet lines on each individual spin.

There are no poker symbols used in Gonzo’s Quest; all the symbols, carved on stone blocks, are pre-Columbian hieroglyphics related to the game’s theme. The seven regular symbols represent a parrot, a jaguar, a crocodile and four humanoid figures that could be people, gods or demons.

Wins require at least three matching symbols in unbroken sequence from the left-most reel, and prizes range from 3X to 2,500X the bet, depending on the number and type of symbols on the winning bet line like in many games at crazy luck casino. After every spin, any winning symbols “Avalanche” and disappear, with new blocks cascading down to fill the spaces vacated. These give the players a chance at further winning combinations on the same spin, while at the same time applying a progressive multiplier to all wins, which grows larger with each Avalanche that still produces a win. 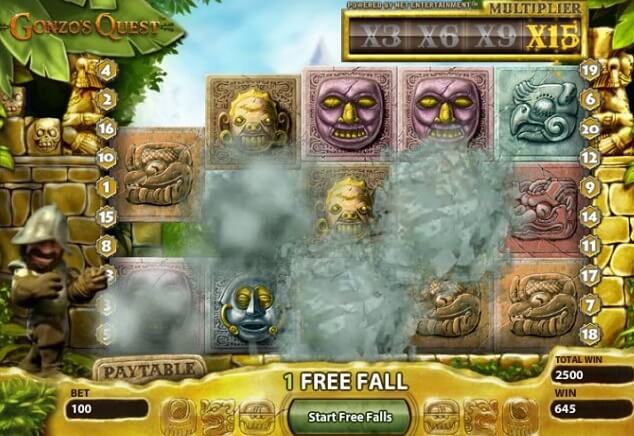 The Wild icon in Gonzo’s Quest features a question mark on the stone block, and it can substitute for any symbol to increase the winning lines created on the spin. The Gonzo’s Quest scatter symbol is called the Free Fall icon; it features another hieroglyphic, of a tongue-pulling monkey, on the stone block. If a player scores three Free Fall symbols on a winning bet line (in succession, starting at the left-most reel), it triggers 10 Free Falls (aka free spins).

Another three Free Fall icons appearing in the correct positions during a free spins round triggers an additional 10 Free Falls. Wins during free spins are also multiplied X3, and this feature can combine with the Avalanche multipliers. For example, in normal play, four Avalanches in succession that each produces at least one winning bet line will result in a total multiplier for that round of X5. Four successful Avalanches in succession during Free Falls mode, on the other hand, will increase the total multiplier to X15. So a player who achieves five of the highest-scoring icons on a bet line on the fourth Avalanche of a Free Falls round will see their original win, 2,500 coins, multiplied X15, in other words winning 37,500X the line bet. So the game can offer some substantial wins to the dedicated player.